Technology trends for the world of tomorrow 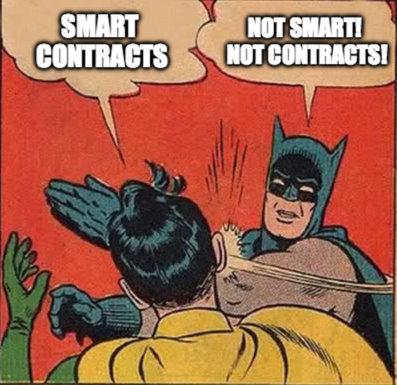 If you take an interest in blockchain technology you have likely heard of “Smart Contracts”. Let us dig a little deeper…

Wikipedia has a nice page that defines Smart Contract as:

Smart contracts are computer protocols that facilitate, verify, or enforce the negotiation or performance of a contract, or that make a contractual clause unnecessary.

As an aside, I have to admit a certain bias against technology terms prefixed by “Smart”, “Simple”, “Open” etc. They are usually a sign that the technology is compensating for something…!

First, let’s take a look at what they do, and how they work.

The net is that Smart Contracts today are hunks of potentially re-entrant procedural code that can mutate local and global state when invoked from remote (potentially malicious) clients. The threading and transaction model is complex, due to the distributed nature of the system, and there not being a central coordinator.

What could possibly go wrong! 🙂

What we need is:

Dan Selman is a software engineer and product architect with over 20 years of experience in the IT industry. He has created software products for BEA Systems, ILOG, IBM and others.